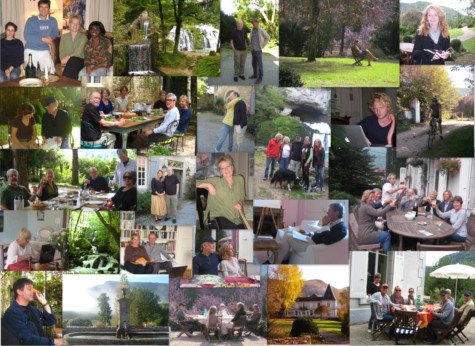 “James Bonnet’s Stealing Fire from the Gods is a must for every creative writer. Even for experienced authors, screenwriters and creative thinkers, James has a unique way of revealing the skeletal structure of the story you wish to write, and even more, revealing the essential lineaments of what Joseph Campbell called “The Monomyth,” the essential archetypal story of human struggle and fulfillment that can be understood by any child or adult, and from whatever culture. James Bonnet’s commitment to the same underlying principles of creative visioning and writing has matured and developed for over for thirty years–which marks him as a master. Or if you prefer, think of him as a Promethean wizard whose fire-theft has been so successful, it can boil any number of cauldrons of inspiration – including your own.

“Bonnet’s rich feast for the soul is mirrored in detail by Cynthia and David Price’s Franche Comte  hospitality, where every day sees fresh local produce combined with effortless grace and art for say a petit dejeuner – not to mention sumptuous Cordon Bleu caliber repasts with plenty of good wine at the end of a long day of visioning.

“Sorry, this workshop excludes people who think that hard work and creativity can’t be delightful, delectable and romantic!”
Stephen Larsen, Ph.D., Professor Emeritus, SUNY, and author of A Fire in the Mind, The Life of Joseph Campbell,  and the recent award-winning: The Fundamentalist Mind:  How Polarized Thinking Imperils Us All. (Larsen and his wife and co-author Robin spent a delightful 10 days at Nans Sous Ste. Anne, working on a screenplay based on Campbell’s life.)

“James Bonnet’s Storymaking Workshop Retreat in Nans Sous Sainte-Anne introduced me to an approach that I have used in everything I have written since: Travel essays, short stories, poems, a film script, and in-depth outlines and chapters for two historical novels.  The group gathered there developed a bond we have continued to nurture ever since, with ongoing creative communication, collaborations, and travels together.

“As our group met again in Santa Monica for another workshop, James’ process  continued to become integrated into my approach to become the natural way I write. Consideration of the hidden structures in all great stories has allowed for more depth, meaning, and clarity to emerge in my own writing.  Mindfully shaping my stories to reveal the transformation of larger entities has allowed me to write in a way that highlights hidden psychological metaphors, points to bigger truths than just my topic, and resonates with a wider audience.

“James’ utter respect and encouragement of my own creative unconscious has led me to trust my intuition in a way that has proven invaluable to me.  In my own teaching experience in Paris earlier this year I used Stealing Fire From the Gods extensively to help other writers develop their own intuitive process and gain confidence in their own creativity.  James’ advice about following one’s fascination and attending to even negative intuitive feelings resonated with the writers and helped them create incredible stories.

“Recently, another writer and I spent a week in Santa Monica consulting, learning, exploring, and delving into a wild variety of topics with James.  As always, so many new ways of thinking and creating stories emerged, and this made me realize the incredible richness of James’ ongoing mentorship.”
Erin Byrne is an award winning writer, most recently for 2012 Travelers’ Tales Grand Prize Silver Solas Award for Spirals, Memoir of a Celtic Soul. She has been a guest instructor for the Evening Writing Workshop at Shakespeare and Company Bookstore in Paris, and is co-editor of Vignettes & Postcards, an anthology of writings from this workshop.

“Not only does Jim have a profound understanding of story (see his book, Stealing Fire from the Gods) but he can apply it to a writer’s work to identify what’s working and what’s not working in their story. In my case, he saw the source of a big problem in my novel that had been bothering me for more than a year and he showed me how to fix it. It was a transformative moment for me, the scales fell from my eyes and at long last, my story really worked. I could see and feel how energy could be transformed as it flowed through my story.

“This happened on the first of five days of one-on-one sessions I had with him during his seven day workshop. Going in, my hope had been to achieve that problem resolution by the end of the workshop!  Instead, as the week progressed, with that problem out of the way at the start, he gave me numerous other valuable insights to use. He understood my project as I saw it, he deepened my understanding of story and I was rocket propelled to get on with my work.”
Gary Bower, physicist, author, “The Physicists’ Code”

“I have spent many years studying novel writing – including completing an MA in creative writing – and ‘story’ was a word that rarely came up. I therefore learned to write without understanding story. It was only very late in the process of writing my first novel that I realized that I had this fundamental gap in my knowledge.

“I began to study story but the books that I read on the subject still felt incomplete. It was this search for an understanding of story that led me to James Bonnet’s work. I came away from the Storymaking Retreat with so much more than just a new and exhilarating understanding of story. I learned how to think differently about story and, after spending years struggling with my own novel, the story that I knew I was trying to tell clicked magically into place. I developed a fresh routine and momentum to my writing. I made some great friends as well as some great memories. This retreat is a great experience in and of itself, and a must for anyone who truly wants to tell great stories.”
Christina Okoli

“I think about the gift you have given to me in your wisdom and encouragement. You have discovered the secrets of the depths, the way to travel with the tidal forces in our souls. You have enabled us to navigate toward our own unique expressions of Universal Consciousness.

“I pray that I will be blessed with the opportunity to learn and laugh with you again. I am honored to call myself your student.”
Kelli Sebastian

“I learned more about how to handle my writing urges/ideas in a beautiful French stone house; we ate incredible meals with delightful wines each day; I met people who–in one short week–became friends for life.  What a one-of-a-kind, wonderful time!  May have been among the top ten best things I have ever done for myself.”
Cate Stetson

“More than anything a writer needs a trusted listener to travel with him on his journey. Jim Bonnet was that person for me when I attended his writing course in September 2008. His constant probing and questioning allowed me to see all the way round my work with a sharpness and clarity that had been intermittent at best and -frankly -sometimes altogether missing. There are moments when you say to yourself: ‘This is why I want to write!’ And when I was on Jim’s course that feeling came to me so strongly. Jim has a methodology and an analysis of the writer’s journey which ties in with the arc of a story and even with the arc and trajectory of our own lives. Getting to grips with his understanding of Story will not only make a person a better writer but -dare I say it  -a better human being.”
Stephen Don

“I have been working on a major documentary film-project for 7 years. The 2-day-workshop in Los Angeles and the studying of Jim’s book has been a very supportive guide to ask myself the many needed questions. The week long workshop in France with the daily one-on-one 90-minute coaching was the breakthrough experience for me. It laid the foundation to finish the story and to reach the final stage of creative development. I am deeply grateful and highly recommend anyone in a creative process to study and work with Jim.”
Martin Rausch, Switzerland

“I found the workshop educational as well as instrumental in helping me focus in a way that I don’t generally allow myself to due to distraction.  The surrounding forest and water and tiny town all worked together to emphasize this.  Jim is great one on one and I got a lot out of our meetings for which I found him well prepared.”
Ulrich Schmid-Maybach